If you ask a kid if they want pizza they will always say “yes”.

Once upon a time there was a girl who was really excited to have her own blog and stuff. She was like I’m gonna write on this thing forever! (yo)

Once upon a time, she did

Then she got really lazy and was like maybe if I just think really hard, my thoughts will magically type themselves.

Also she found out that magic markers actually didn’t have any magic in them.

Then she found a prince.

Then she was like I can just make up excuses about how busy and tired I am.

Then there was a fairy godmother who was like, here is a kbillion dollars.

No, no there wasn’t.

“Wow! This is the best fairy tale/ story I have ever read!” Said no one ever.

I’ve wanted to run a marathon for as long as I can remember, something about running for a long time without dying just really appeals to me. So for the past 5 years I trained for it by following a challenging workout routine. 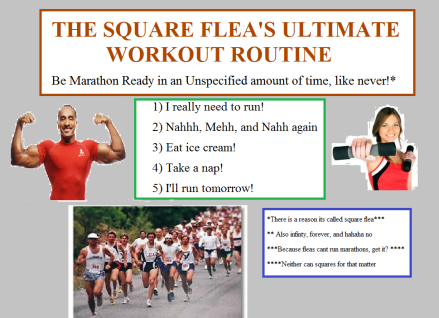 Yes, I know my workout routine is very complicated but I’m one motivated girl! In the past 5 years I only skipped a day or two where I did not follow my routine and actually ran.

What can I say? I’m very commited.

Yet somehow, even today, I can’t run up the stairs without fainting and being rushed to the emergency room. My family was convinced that it is because my workout routine is terrible, something about heart, muscles, and breathing, whatever. When I told them how ridiculous that sounded they asked me to come up with a different reason as to why I couldn’t even shrug without wheezing. I told them I was possessed by the Korean demon of unmatharoning, psuiondin (obviously).

So then they made me banish it. That went really well, especially when I  realized the ceremony called for the burning of 5 $100 bills.

I got a real workout routine instead.

That was two months ago, and I still haven’t started it.

It’s not because I’m lazy or anything. In fact, it’s because of my extreme unlaziness.

It’s a great idea. People don’t like seeing visual inconsistancy so they become more commited to the task. They strive to get the X at the end of the day so they can show it to their mommies and hang it on the fridge. Also it’s kinda like that snake game . Maybe.

For everyone but me.

It only took me a minute to realize that I can’t break the chain if I never start it. Helloo loophole.  And so, I ended up accidentally discovering my own technique called don’t start the chain, ever. I utilized the same psychology used in Seinfield’s method to encourage lack of motivation and laziness. It’s kinda of like reverse psychology but not really. Because its the same psychology, just a reverse method. Instead of keeping a chain of Xs, I keep a chain of blanks, and I haven’t broken that chain for 2 months.

My father and I have an awesome relationship. He’s all like “what’s up my little girl?” and I’m all like “you are baba (that’s what I call him) because your taller than me but watch out because I’m catching up because genetics, yo”. 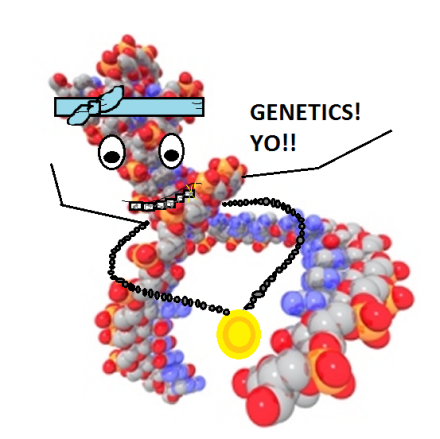 One thing that has always connected me with my father is our very, very strange sense of humor. Most people might not think the phrase the moist tissue farted is funny, but really, that’s their loss. Our endless guffaws at lamp posts, parking lots, and jelly fish  helped forge precious childhood memories.

Yea my dad is cool.

And I’m not the only one who thought so.

In fact, my entire 4th grade class thought so and it was all because of his really cool shirt.

It was a shirt he bought in a flea market, white with bold black letters saying WHOEVER IS WEARING THIS SHIRT IS A POLICE OFFICER. He tried to wear it every time he came to pick me up and all my classmates took an instant liking to silly fake police officer.

Until he began telling his jokes . . .

“And he said it was round! Hahahaha” -Dad

“Come on everyone it was funny! Laugh!”- Dad

“Look! The shirt says DO WHATEVER THE NICE POLICE OFFICER TELLS YOU TO DO so you gotta laugh”- Ricardo Gomez

My father and I knew the laughter was forced but we accepted cheerfully, it was the closest we could get to being funny. Besides he still had the kids cool approval (kid of like the kids choice awards, basically). After all, we knew that our jokes were just so funny that they just went over everyone’s head.

We would never let a joke go over our head.

Right now, I bet that a lot of questions are crossing your mind. Like, is there a point to this story? What was the round thing in the joke? Why do I dramatically type in one word and then press enter? And who the heck is Ricardo Gomez?

There are no answers to these complicated questions.

But there is an ending to this little memoir. You see, about four years later when I was an old and wise eight grader I dug up my dad’s old shirt. I reread it. Then I cut it up and threw it out.

The shirt had a message that was a lot different than I thought.

WHOEVER IS WEARING THIS SHIRT IS

Lie flat on your back and do whatever this nice officer tells you to do.

So your telling me the reason you couldn’t hang out with me yesterday was because Adele was bothering you?

Adele who? Is she school friend?

That Adele! How do you know her? ?

I don’t. I told you she came out of the blue, uninvited. 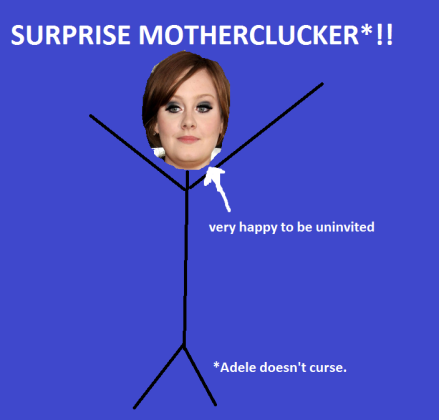 She probably found out about my kick ass blog. Also, I’m awesome. But honestly I think she’s a bit obsessed with me, I was like “Adele go away! I need to really really hang out with this really really cool friend of mine.” and she’s all like “ I can’t stay away, no, I can’t fight it.” And then I was like ” I don’t even know you!” and she was all like ” You and I have history or don’t you remember?” and I was like “No. No we don’t.”

So she just stayed with you? What did you guys do?

Well, all she wanted to do all day was set fire to the rain and watch it burn while she touched my face. After failing miserably at that activity we tried chasing the pavement but then we gave up.

Then we rolled in the deep.

I don’t know. Maybe it was the ocean, maybe it was a deep hole. I don’t remember. All I remember watching a squirrel.

But apparently that’s too boring for her highness because when I suggested we watch ants next she said “Never mind, I’ll find someone like you. . .” and I said “ YOU AIN’T NEVER FINDING SOMEONE LIKE ME!“. I tried not show the hurt but honestly I went home and cried.

It was all very sad, but hey I’m sure we can hang out some other time.

Hello all you wonderful people!

I am oh so sorry that I  haven’t posted anything for more than a week now and I assure you that there is a good reason for it.

You see,  I’ve been on vacation!

Last Thursday, I  departed for the beautiful exotic Island of I’m Sick and in Bed  and just returned from it yesterday. It was definitely a beautiful and relaxing experience.

I visited Sore Throat, Fever, Ear Infection, Throat Infection, Here’s A Headache, and then when I realized that I still had more time in the Island I swung by A Random Bloody Nose every once in a while.

It was great! It was wonderful! It was fantabulous!!

Plus on the fourth day the Island opened up a new attraction called I Don’t Know What You Might Be Allergic To But Here Are Some Random Hives. Needless to say, it was fun!

And every night the Island hosted an extravagant pity party featuring all the best of guilty fattening food! And I love those guys. The parties were so wild and crazy that I lost my voice!

Moreover,  watched lots and lots of strange YouTube videos that completely changed my life around. Including one video trying to figure out the the science of attraction. It claims that one part of attraction is having a positive and enthusiastic attitude because nobody likes a downey downer (Robert Downey jr ??).

The video taught me to speak about all my experiences  in a more positive light so everybody can love me and stuff. Also the word fantabulous is now in my conversational vocabulary storage bank. All because I want to seduce all of you! (Are you fantabulously attracted to me now?)

So even though I’m still on lots of medication it’s alright because butterflies! That’s right! They’re soo pretty and positive and positive. Except when they are all dead and stuff in those butterfly museums! (Or if they’re in your stomach, but really people why would you eat those things?)

The best part about the vacation was that I did a bunch of soul searching and found out a lot of new things about me! Like:

So I hope all you fantabulous people are doing well!